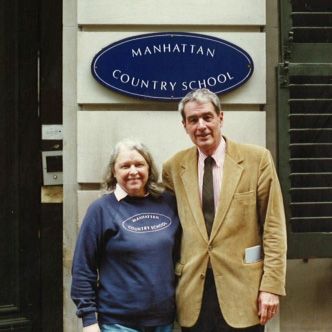 Lyndon B. Johnson entered his second term as president. The war in Vietnam was escalating. The march on Selma led to the passage of the Voting Rights Act, while race riots erupted in Watts, California. Malcolm X was assassinated.

As these history-shaping events were unfolding across the globe in 1965, in New York City Gus and Marty Trowbridge were planting the seeds of an idea that would grow to become Manhattan Country School. Both were moved by the state of current affairs and captivated by the call for equality set forth by Martin Luther King, Jr. in his “I Have a Dream” speech.
In his early years, Gus attended Chestnut Hill Academy, an all-boys pre-K through eighth-grade prep school in Northwest Philadelphia. In his memoir, Begin with a Dream: How a Private School with a Public Mission Changed the Politics of Race, Class, and Gender in American Education, Gus describes the school as a Dickensian place where the boys dressed in grey flannel shorts, white oxford shirts, ties and blue blazers. Upon admission to Chestnut Hill, boys were assigned to one of two teams, a division that fostered an ongoing rivalry. During Gus’ time there, in the 1940s and early 1950s, the student population was overwhelmingly Episcopalian; there were no blacks, Jews or Roman Catholics.

Marty spent the first three years of her life in the segregated South before moving to New York City. She began her early childhood education at Bank Street School for Children, founded as a laboratory nursery school run by teachers, psychologists and researchers. Later she attended City and Country School, which served children from 2 to 12, relied on blocks and other experimental tools for learning, and had a summer farm program in Hopewell Junction, New York.

As adolescence approached and his time at Chestnut Hill came to an end, Gus selected The Putney School, a progressive boarding school in Putney, Vermont, for his high school years. Putney existed in stark contrast to Chestnut Hill. It was co-ed, students called teachers by their first names, effort marks were given instead of letter grades, there was no formal dress code and it had its own dairy farm.

As a student of progressive education from her youngest years, it is of little wonder that Marty would choose to attend Putney as well. She enrolled just one year after Gus. “I will always be grateful that Marty chose to attend Putney, and that we found each other there,” Gus recalls. “By junior year, we were a couple, and her influence on me exceeded all others, as it would for the rest of my life.”

After Putney, Gus went on to attend Brown University, a decision influenced by his desire “to put my newly acquired liberalism to the test in a more traditional setting.” While completing the requisite courses for an English degree, he was also active in Students for Democratic Action and the civil rights committee of the Brown Christian Association. He also tutored children in a segregated black neighborhood of Providence and worked in an orphanage.

Marty arrived at Brown the following year, choosing to major in music. The couple married in 1956 and moved to New York City the next year, after Marty’s graduation. Gus took a teaching job at The Dalton School, on the advice of Peter Buttenwieser, a fellow Putney graduate, marking the beginning of his professional commitment to progressive education.

After eight years of teaching, Gus became disenchanted with the exclusive environment of New York City independent schools. This, combined with the rise of the Civil Rights Movement and the model of youthful leadership set by President John F. Kennedy, fostered a desire within Gus to become a head of school. Several schools in the city sought Gus to fill their top position, but Gus and Marty ultimately decided their goals would be best accomplished by starting their own school. Looking at Manhattan Country School today, the influence of Gus and Marty’s time at Putney and Marty’s years at City and Country is clear.

“Given Marty’s and my politics and our shared experience at the Putney School, it is no surprise that when we founded Manhattan Country School, New York City’s first fully integrated private school, in 1966, we would adopt the progressive model of education, seeking nothing less than to change the world.”
Back